Each year as the nights get colder and mince pies start to appear on shop shelves, the excitement surrounding the arrival of major Christmas adverts almost eclipses the excitement of the big man in the famous red suit.

It could be argued that the classic Coca-Cola ‘holidays are coming’ spot from 1995 was one of the first adverts to start a tradition of holiday advert anticipation. For a while, it’s appearance during popular Saturday night programmes was often referred to as the ‘start of Christmas’. Its popularity has continued throughout the years with the famous truck travelling across the UK.

Enter retailer John Lewis to the Christmas ring. While they have been advertising during the holiday season since 2007, it was their 2011 ‘The long wait’ advert that had many dubbing them the winner of Christmas advertising. It was the first time they plucked at the nation's heartstrings with a tale of an impatient little boy who couldn’t wait to give Christmas gifts to his family, set to a stripped down, acoustic version of a popular song. This would come to be John Lewis’ Christmas advert calling card through the years.

With the two companies setting the festive scene each year it made sense that fellow retailers would get involved, making big-budget campaigns to compete for customers attention. Sainsbury’s offered 2014 epic ‘1914’, telling the tale of Christmas during wartime 100 years earlier. They followed up with the equally memorable 2015 ad ‘Mog’s Christmas Calamity’ following an adorable, yet disastrous family cat. While Apple presented a young teenager filming his families Christmas adventures in 2013, and Frankenstein sharing Christmas with an unsuspecting village in 2015.

This year at Pitch, we all anticipated the return of the major Christmas adverts and, as with most things, we had differing opinions of the offerings by retailers, grocery stores, fast food restaurants and airports. Therefore, we created a league table, voted and crowned an overall winner.

At the time of voting these were the major adverts that had been released and voted for on Marketing Week.

Drawn at random, the first round had competitors facing off with Tesco up against Sainsbury’s, Asda against Morrisons and Aldi v Lidl. The results of all of the first round of voting are shown below. 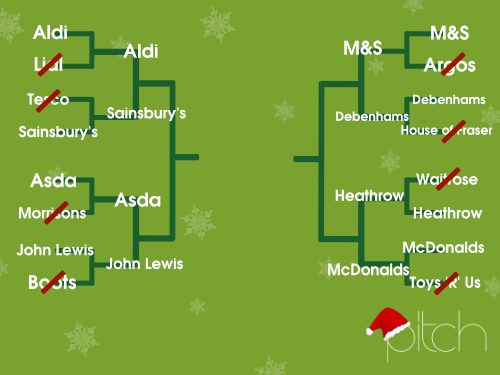 The first round saw the fall of some major retailers that were popular with Marketing Week voters with Tesco, Boots and Morrisons not progressing to round 2.

As numbers got slimmer it was becoming clear the type of adverts the office was responding well to. Humour was a hit with Aldi, Sainsbury’s and M&S fighting for the semi-finals and tender stories from John Lewis, Debenhams and Heathrow also progressing. 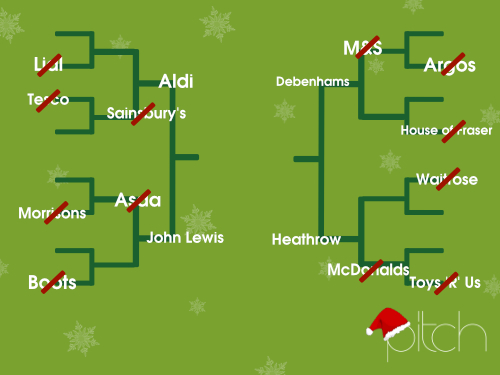 Aldi’s Kevin the Carrot returned this year to tell a tale of romance this Christmas as he tried to woo another carrot aboard a train.

Kevin would have to take on not only the most anticipated advert of the year but a monster as well. John Lewis returned to an emotional spot after last years humorous Buster the boxer dog advert, telling the tale of an unlikely friendship between a young boy and the monster that lives under his bed.

“I really enjoyed Moz the Monster, the unlikely friendship between the boy and the monster under the bed was so sweetly portrayed but what I always enjoy about John Lewis Christmas adverts is that they always highlight the joy of giving more than receiving.” - Gabby

Also fighting for a place in the final was retail giant Debenhams and unlikely contender Heathrow Airport.

Debenhams took inspiration from classic fairytale Cinderella. Love blossomed on a train between two commuters, one loses her shoe and as this is a modern fairytale, a social media campaign to reunite the pair ensues. Eventually the two, and the shoe, fine each other on a snowy street, with a little help from a famous face.

A beautifully reworked modern day fairy tale with the added bonus of Ewan McGregor. So Debenhams, will you kick ass in the 2017 Xmas ads? 'You shall' indeed! - Priya

The last finalist saw Heathrow also bring back an advert favourite in the form of the Heathrow Bears. Last years ad showed bears coming home for Christmas via Heathrow airport whereas, this year's spot told the story of the bears, from meeting on an aeroplane through to today with their large family.

"Mr & Mrs Bear are truly heartwarming and give you that ‘warm & fuzzing’ feeling.. to me that is what Christmas is all about! Favourite ad <3” - Trish

The final two saw humour vs sentiment, carrot vs bears and not a John Lewis in sight. 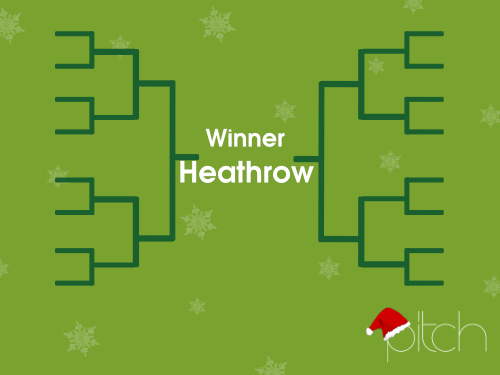 An obvious choice for some here at Pitch

“A clear winner of the 2017 Christmas TV adverts.  Who doesn’t love a traditional Classic Teddy bear? And then they go and combine it with family’s coming together at this magical time of year, Christmas! Just adorable.' - Eloise

But not so much for others

Which advert did you enjoy most this season? Or do you rely on some of the classics to get you in the Christmas mood?

Whether you are barmy for bears or crazy for carrots, I hope you enjoy the festive feelings the many adverts have to offer, happy viewing!