When recessions hit, media outlets and recruiters alike have a tendency to focus on the impact of redundancies and job losses and can miss the impact which the fears associated with a recession can have on career progression.

In our recent research into the impact of remote working and furlough on employee desires to change jobs, around 72% of employees stated they were considering looking for a new job either due to emotional factors or financial drivers. However, when contrasted with our recent Linkedin survey, 58% of respondents are nervous to change careers due to the economic outlook of the United Kingdom. 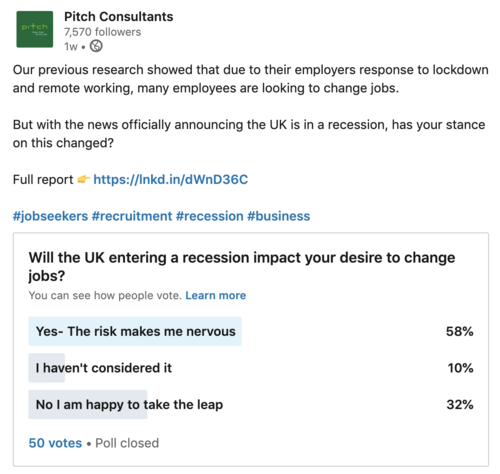 Why are you nervous to change jobs?

We recognise that changing jobs is already a daunting prospect, and when you add a recession into the mix you may reconsider your desire to move or put it off out of fear of your new company collapsing and making cut backs to the detriment of new hires.

Research shows that putting yourself in maintenance mode at work is likely to lead to unhappiness and a lack of enthusiasm in the workplace and therefore a lower sense of achievement in your everyday life.

Furthermore, if working for a poor employer, staying put could be more damaging to your career in the long-term. Due to financial restrictions, they may be less likely to invest in career training and development, they may make redundancies and give you extra workload with no additional pay.

In the long-run, it is important to evaluate your choices.

Whilst many businesses will cut back on the volume of vacancies, those who are advertising and hiring are likely to be doing so after a prolonged thought process.

Often taking into account considerations over the financial integrity of the business and volume of workload, if a company is hiring it is a good sign that they require an extra pair of hands to help guide them through.

Though mostly accurate of newly created roles, a similar process of thought and deliberation is often undertaken when replacing talent. However, if you want to be certain a firm can financially support your role, we always advise you do some research into the financial accounts of a company or enquire into role stability and why it was created during an interview.

You can earn more

The concept that you can move into a higher level role during a recession and earn more money may seem a little counter-intuitive, but it is founded in research.

Whilst during a recession many workers are likely to transition into a role which is a similar level to previously, those who chose to up-skill themselves and seek their own promotions are likely to be as successful compared to within a normal economic environment, leading to a higher wage in the long-run compared to those who opt to stay put.

Though it can be easy to assume that competition in the market will be higher during a recession due to more people being available for work in the market, this may not be the case for some promotional level roles, where a recession instead creates the potential for opportunity.

Whilst we advise that you take every precaution when opting to change jobs during a recession (considering factors like finances, workplace culture, progression opportunities etc), delaying your job search out of fear is likely to be counter productive to your career development and wellbeing during the long-term.

Hopefully this article has addressed some of your concerns, and if you are considering looking for a new job, you can view our current vacancies here.